It’s hard to anticipate what hardware you will need when setting up your own digital marketing business. I set up Peter Doak Global on June 10th 2015. A year later, I believe it’s useful to outline what my experience was of the technology hardware I needed and the ups and downs of figuring that out.

I will be creating a series on my overall journey, the hardware used is just one part.

It’s been filled with highs, some lows but all good and not a single regret.

This article is about the technology hardware I have used and would recommend. The software side of things like Customer Relationship Management (CRM), communication tools and more will be in a separate article. For now we are looking at the things you can hold in your hand.

Taking a quick look back to my previous employment, coming from 7 years in a huge business with a global corporate culture and then more recently a local advertising business that had an established technology setup, I was pretty much used to the best tech hardware money could buy.

To be clear, if I had any complaints about working for someone else, the technology we used was never one of them. Going from that comfort of a tech team there on demand, someone else setting up all the infrastructure I needed, to being in total control and responsible for all of it myself was, to say the least an eye opener.

What hardware was I going to need to support my business?

I wouldn’t call it essential…but I think my tablet deserves a high mention here. I could do without my tablet, my business wouldn’t crumble without it but I wouldn’t want to operate without it. 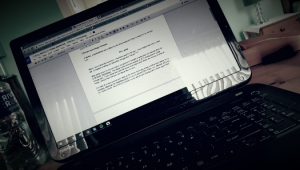 When I first started this business, I had been open for 10 days, I had a laptop that was 4 years old…it stopped working, my immediate thought was “Crikey! What will I do now?”.

With pretty much no reserve cash in my business I thought it would be prudent to save and I bought a laptop that cost around £120 , Big Mistake! The laptop would not work properly at all. It simply wasn’t a high enough spec. I was a cheapskate and I paid the price of having to work double the amount of time on things I should have because the laptop was so slow.

A couple of weeks passed and I built up the money to be able to buy a better spec laptop, it’s a Toshiba, Windows 10, Satellite-L50-B, it cost me around £350. Pretty cost effective and suits my needs entirely. I have had it for exactly a year and used it heavily and it’s still in great “nick”.

I have gone through several smartphones since starting Peter Doak Global, the first was an absolutely dreadful…I can’t even think of the brand name it had because it was so obscure. I think the main problem was it’s lack of speed, which killed my response time to issues on the move.

The reason that I actually bought the phone for something like £80 was because my Nokia Lumia 520 was broken and I couldn’t use it so I had to knee-jerk and go out and buy the first thing I could afford.

The phone I bought after that was amazing, it was a Sony Xperia M4 Aqua. The phone itself wasn’t actually amazing but it was the first time I had used Android as an operating system….at this point in my career I am in the unique position to have used, apple, Microsoft and android mobile operating systems and wanted to share this perspective on them:

Apple: Dreadful, nothing makes sense in terms of user experience and most of your time will be spent between updates and losing data after updates, also apple isn’t compatible with anything.

Windows: Everything makes sense, but feels clunky and there aren’t the same number of app providers adopting the platform for it to be a main player.

As I said the Sony Xperia, wasn’t a great phone and it wasn’t so much the hardware letting me down, it was my bum! I sat on it and it the screen cracked, got it repaired but it was never the same. I now have an amazing Samsung Galaxy S6…it’s expensive but amazing, android operating system and it’s faster than a cheetah just after a can of red-bull going down a hill.

Do you need a Samsung S6 to run your business? No. I would suggest that you need an android operating system and fast processing power to conduct business on the move.

I was given a Christmas present in 2013, a Nexus tablet made by ASUS and it’s been used practically every single day since I got it. It’s never really been used for work, except for maybe testing websites or Skype chats on the move, I use it mainly for playing Angry Birds and reading business books on my kindle app!

I bought a notepad from Tesco and promised myself I would only use it as a last resort. There have been times with clients when the use of a smartphone or a tablet wouldn’t have been appropriate and it was just easier to use the notepad. My black and red Tesco notepad works well in an emergency. I am not absolutely sure I would count it as technology hardware but I guess it’s a physical thing that is connected to my business. While we are at it the pen I use is a black roller-ball pen from Tesco as well, I love it!

Two additional notes: I love to stay light and be able to move around with my technology, I love the idea of one day opening up my laptop on a beach in the middle of a heavy sunbathing session to check up on project progress then go back to relaxing. To do that I got a great bag from Amazon that I have had for a year now as well, it’s from Duronic and I got it for £7.00, I checked it out and you can get it now for £11.99. They must have realized that they undercharged for it!

Something I haven’t got and don’t think you need:

Printers, I have been in business for a year and have never owned a printer myself, I think we have gotten over using paper in favor of emails and showing things on screen. I go to great length to ensure that I carry the absolute minimum bulk around with me and paper does not make the cut…nor does a printer.

Links to the hardware in this article:

How much has this all cost overall?

If I was doing this over again I would be pretty confident that I would need about £800 in terms of hardware costs to start up.

Thank you for reading. It’s been a fun first year, and having generally documented most of my ups and downs there have been a few that have really stood out as important, one in particular, it’s a real game changer for anyone who has a business and wants to get more sales.

If you would like to be one of the first to hear about it, add your email in below and I will add you to the list of those to get notification of it’s availability in advance!